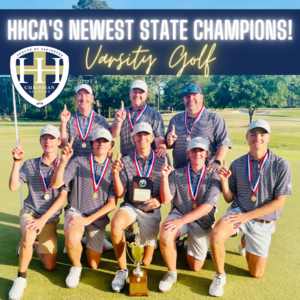 HHCA Varsity Golf brought home another State Championship title for Eagle Athletics on Tuesday, April 27, at Coastal Carolina University's Hackler Golf Course in Conway. The Eagles scored an impressive 295 on Monday and a solid 302 in the final round. With a two-day total of 597, they outpaced runner-up Palmetto Christian by 14 shots.
Team Coach Jason Suddeth said, "I knew coming into this year that we had a lot of talent. When you have a player like Max Green at the top of your lineup, you know you are going to be competitive. What I didn't know was how great the chemistry would be between these boys. This really took us from being a good team to being a team capable of winning the state championship. I couldn't be more proud of the work they put in this year to bring the state title to HHCA."
This is the third State Championship title for the Eagles for the 2020-2021 school year. The Eagles also claimed State Championship titles in Football and Girls Basketball.
From Lowco Sports:
"HHCA's Max Green fired a 4-under-par 68 to finish with a 36-hole total of 4-under 140, claiming the individual title by three shots over Palmetto Christian’s Alex Stephens and Orangeburg Prep’s Harris Holstein.

Congratulations to the Varsity Golf team for their fantastic finish to the 2020-2021 season!  Go Eagles!